This bear hat from Little Things to Sew was such a quick and satisfying project -- just what I needed to lift my spirits after I realized I didn't have time to make all the things for Christmas that I had on my list :).

The outside is fleece coating (is that the right word??  It dosen't sound right) left over from the big hoodie I made last year. It's soft and holds it's shape well without being too thick.  The lining is from a terry towel sheet I bought a couple of years ago on clearance (my plan was to make beach robes but that never quite happened, lol).

I'm never sure how things I make will be received by my littlest but this one was a hit.  She calls it her mouse hat and I agree, the colours definately make it more mouse than bear.

I made medium but I think small would have been better.  (She's almost 4 and according to the book, medium fits size 4-6).  It took me under two hours to make so I may make another.

I added a tab so that it could be buttoned up as that's a bit more practical than a bow for playing outside.  Miss Thing chose the button, which may have helped in the acceptance of the hat ;).  Although she loves it, it's been hard to get a decent picture of her in it: here she's shoveling the driveway.  She always has her tongue out when she's concentrating so obviously shoveling's tough work! 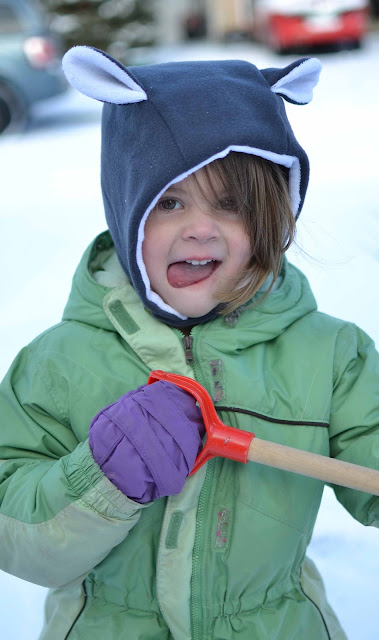 edited to add: I made a second in small and it fits much better.  Although I do think the ears are pretty cute on this one, I actually followed the directions on the second hat and they are even cuter.   Now to try to get a picture . . . 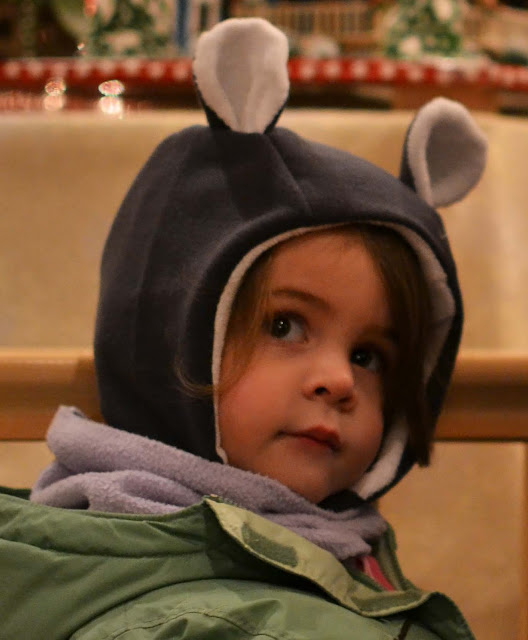