The Secret Agent Trench is such a satisfying sew.  I've made it twice before -- once in a ponte knit and once in some sort of stretch suiting.  The ponte was very popular with my girls but the suiting was not and I think it was because it felt quite cool to the touch.

Since K. would be wearing this one on cool days, likely over a dress or short sleeves, I wanted it to be cozy so I underlined it in flannel.  I was going to do a hong kong finish if the seams were too bulky but they were manageable so I just followed the normal directions and bound the seams together. 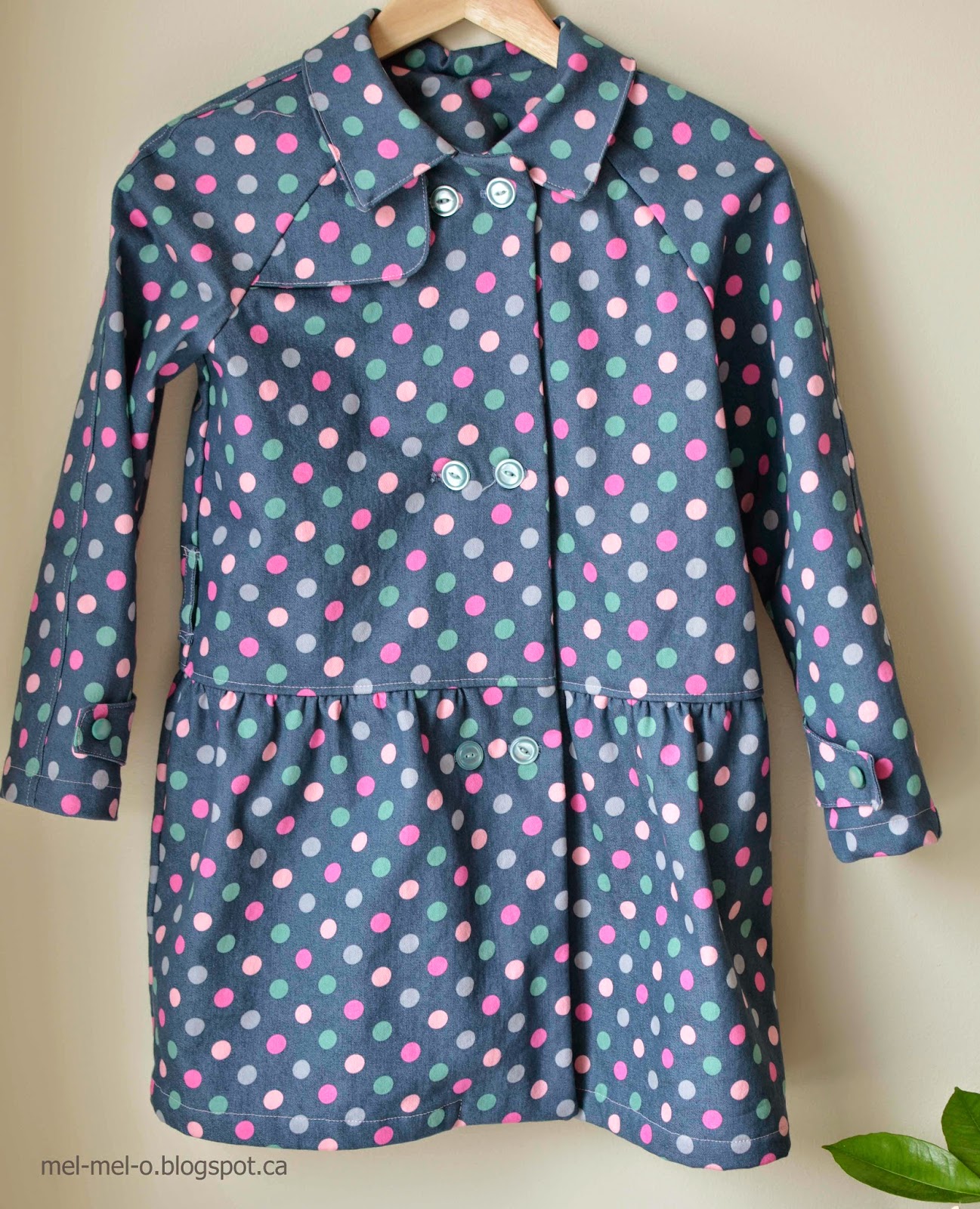 I did skip lining the sleeves because I was worried about bulk but in hindsight it would have been fine.  The flannel gives the twill a bit more body and warmth but didn't add too much thickness. 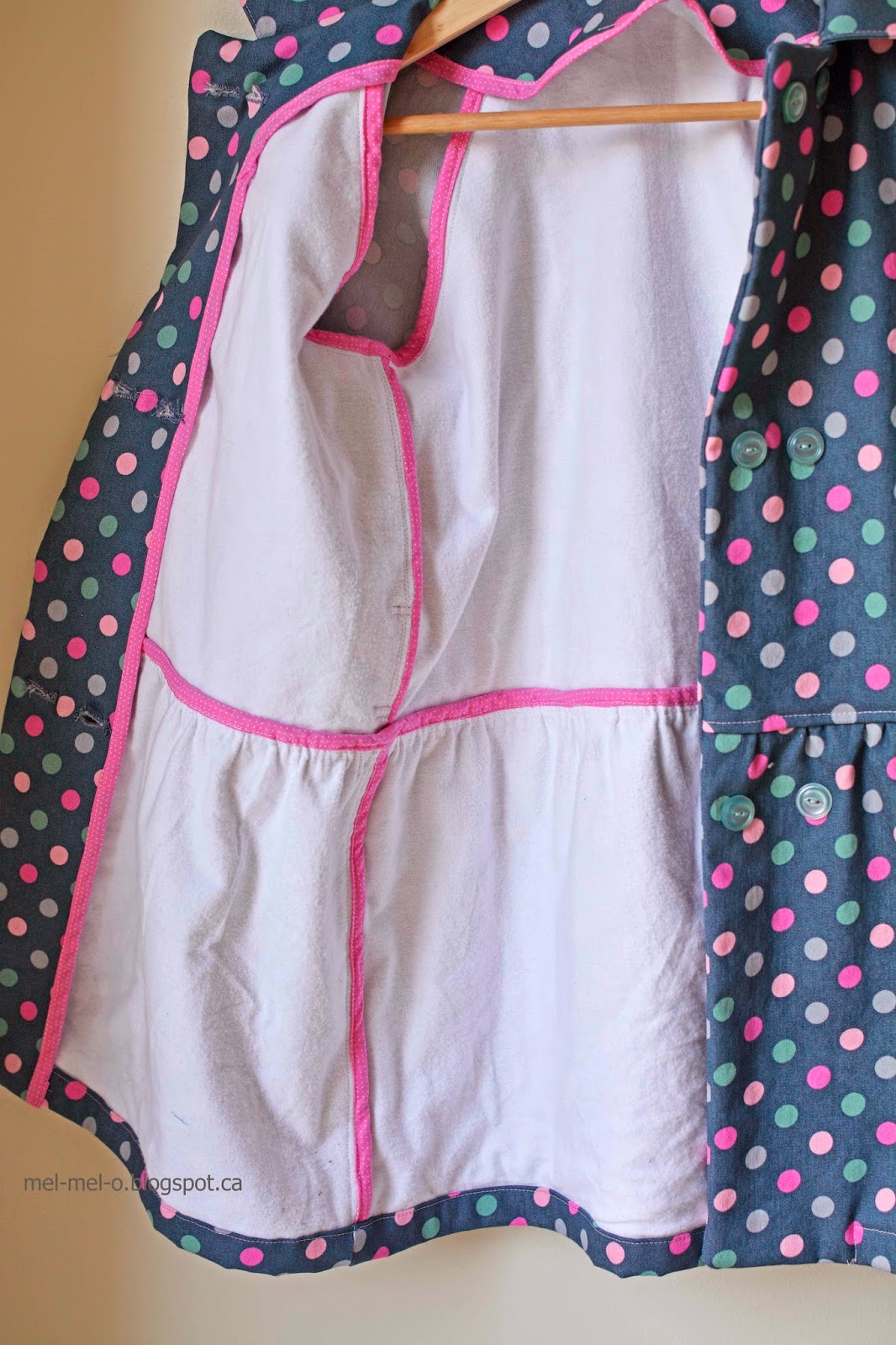 I am always thrilled when I find the right buttons in my button jars.  This time I only had 7 of the same button but had two others for the sleeves that are the same colour. Good enough! 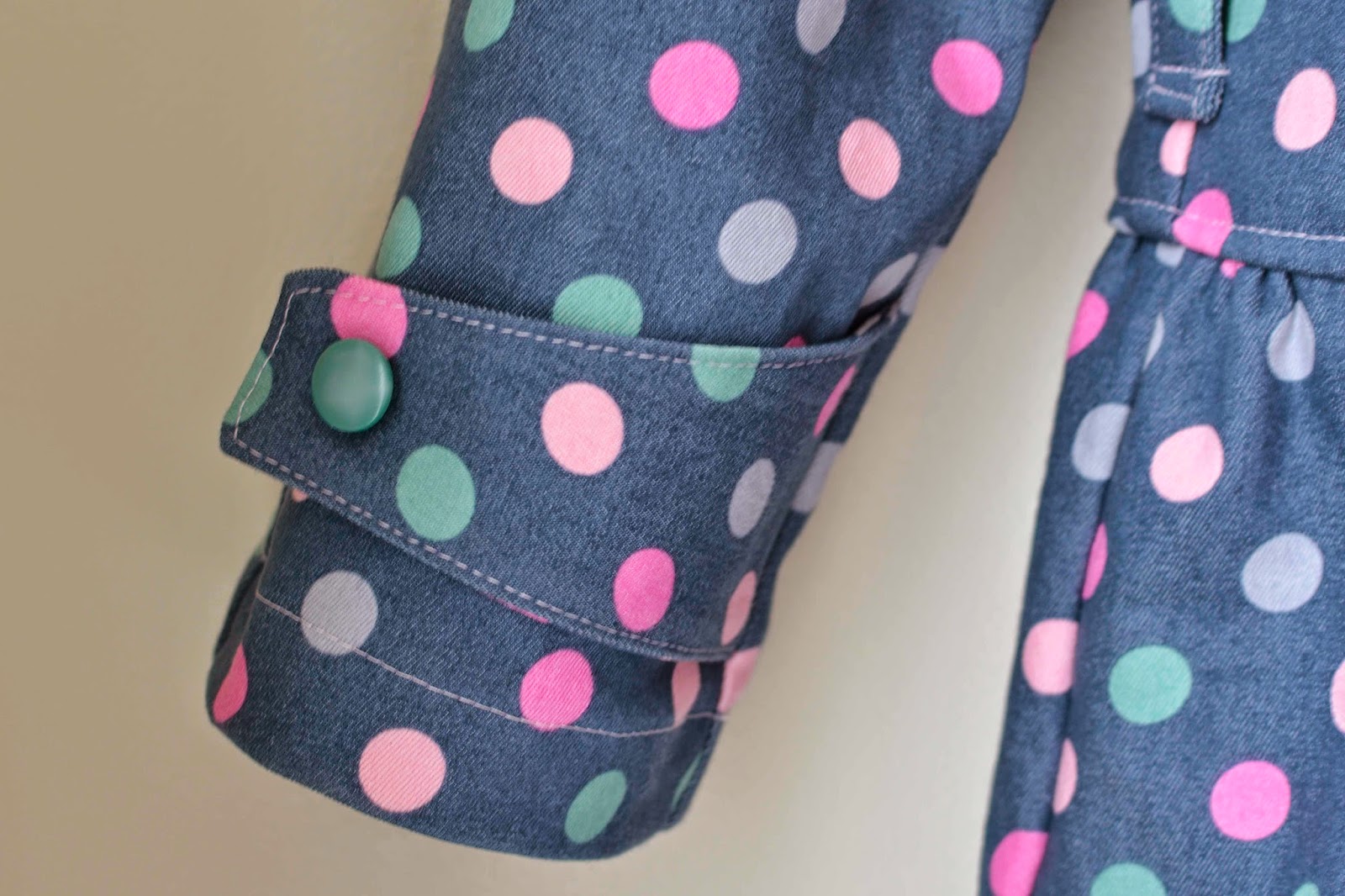 It's size 8 and a bit big right now but this kid is growing like a weed.  I think this is the only time it will be worn with the belt as she said it dug into her belly button (?). 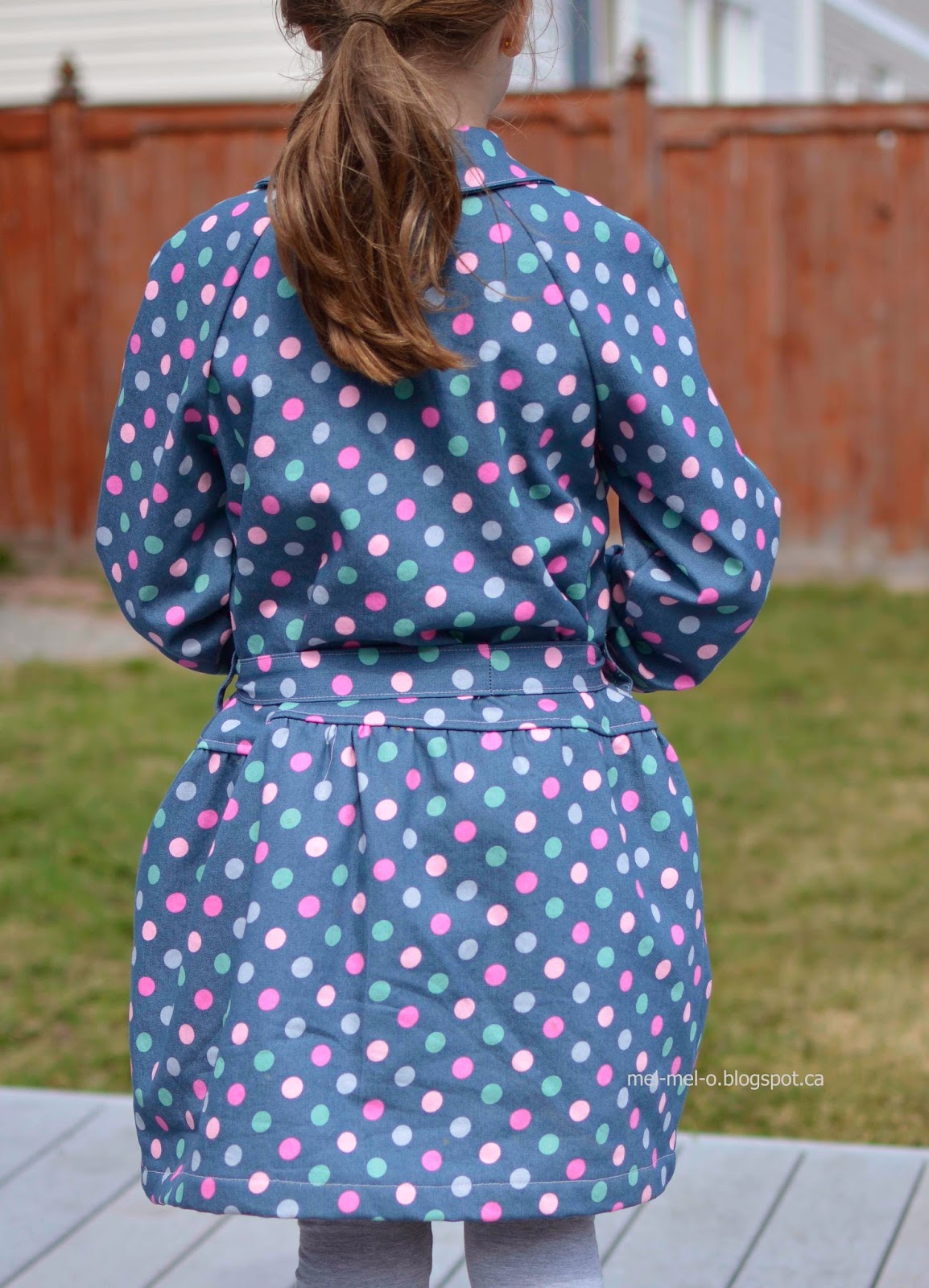 And one last picture: I have a hard time getting natural shots of this little ham so I usually ask her do something funny so I can get a real smile out of her.  Sometimes it works, sometimes it backfires.  In this case, I asked her to jump and I got some really great expressions but this one was the only one in focus and she looks like she's levitating.  Or as though she was sitting in a chair and I photoshopped her in here  :) 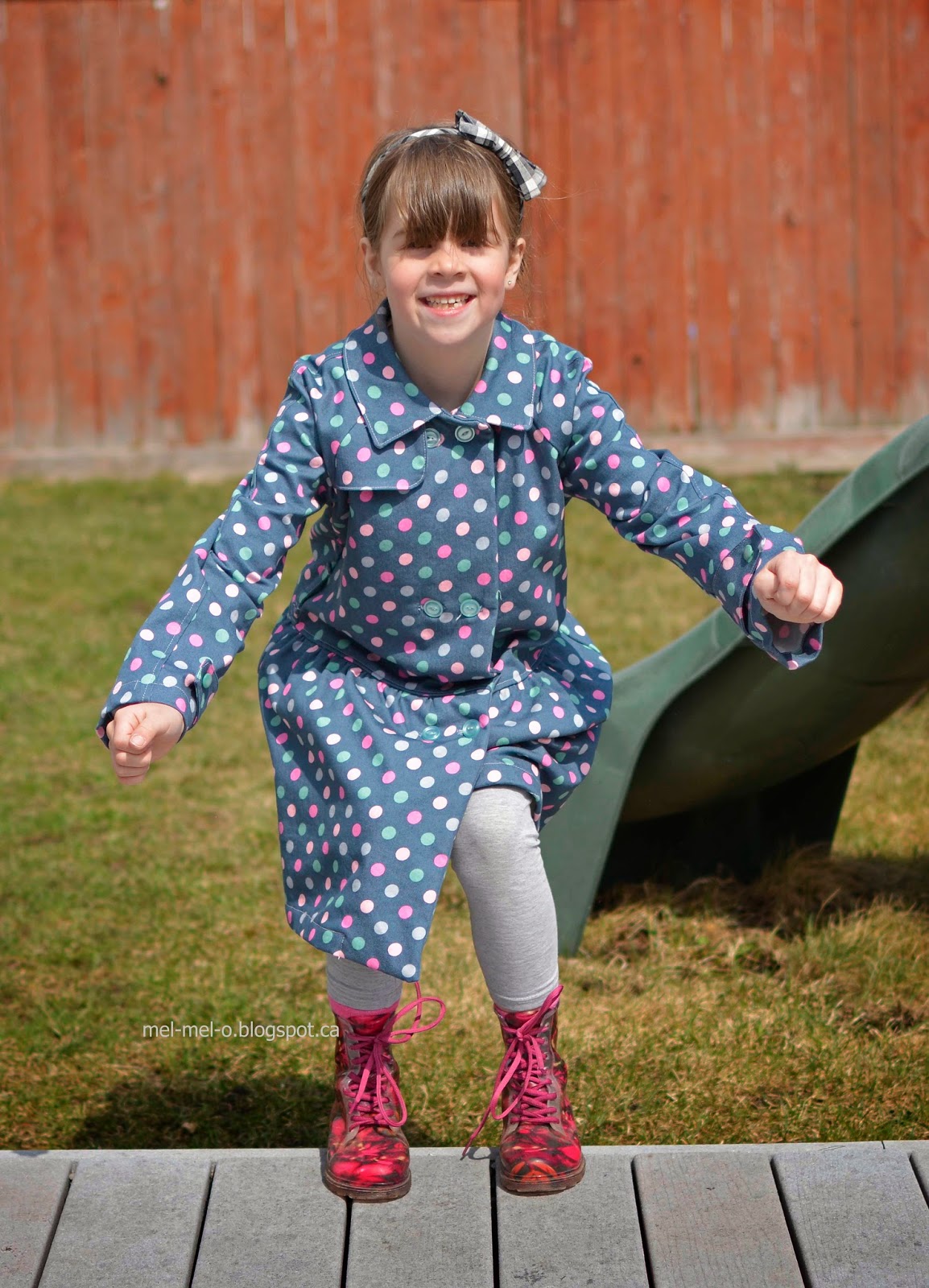 Fabric:
- stretch twill from JoAnns $25. It was on sale and I had an extra 20% off coupon.  The exchange rate cancelled that out and then some so it worked out to about $12CDN/yd.  I used just over 2 yds.
- flannel lining: ~ $7
- binding: I'm going to say stash since it's been in my sewing cupboard for at least 4 years :)