I went to Vancouver last week and, especially as I was kid-free and husband-free, couldn't pass up a chance to go to Dressew. That place boggles my mind! I spent about 2 hours wandering around and still ended up going back the next day -- I can't take it in all at once.

This time around, the clearance section in the basement was filled with knits. Serendipitous as the Renfrew pattern was on my list of things to pick up.  It's not sold in stores here and so I thought I would save shipping and check out Spool of Thread at the same time. (As it turns out, a friend I was meeting suggested dinner at restaurant in the same block so it really worked out!).

I bought a couple of different knits but now really wish I'd bought them all!  I'm in love with this pattern -- quick to put together, fits well and looks great for a casual top.  If you left off the cuffs and used different fabric, it could even be quite dressy.

I'm in between sizes so picked the smaller size and then decreased the seam allowance to 3/8" (partly because I was worried it would be too tight and partly because a 5/8" SA seems a bit excessive for a knit).   I also added an inch of extra length to the body and an inch to the arms.  That might have been a bit overboard but it's super cozy and it may shrink more the next time I wash it.  I may add thumb holes to the cuffs -- I think that would be awesome under a jacket and mitts -- but I'm going to wear it a couple of times first.

I used a "new" stitch for this top.  Since I was going to be away, I took my machine (a middle of the road Kenmore) to get serviced.  When I got it home, I looked at the stitch test the repairman left behind and realized that I hadn't used most of the stitches.  So I got out my manual and wouldn't you know it, one of the stitches was called a straight stretch and was billed as durable and elastic.  With the hours I spend at my machine, how did I not even notice these extra stitches???

So I tried it out and so far so good.  It goes back and forth three times so there's not the gaps or the pulling in the seams as when I've used a narrow zigzag or even my double needle. It uses a tonne of thread -- I filled my bobbin twice for this top -- but if it works, that's fine by me.  I'm really kicking myself for not looking into it more when I was on my Field Trip kick.  Oh, well.  Next time! 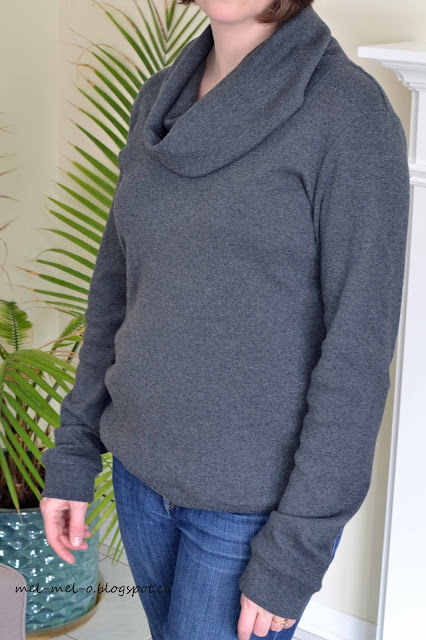 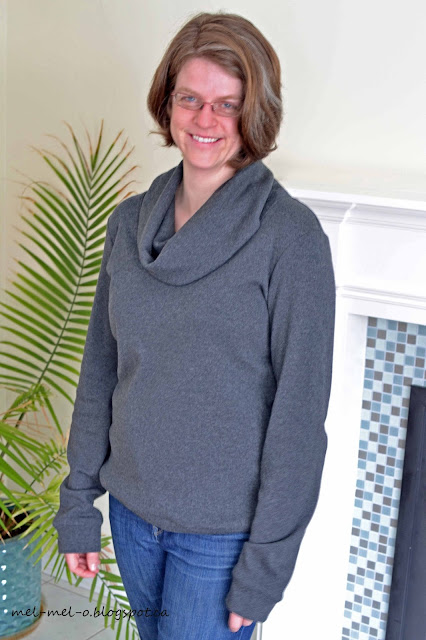 (my husband took the pictures.  I told him he could include my face but the first few were awful.  I asked him what to do my face and he said I don't know, smile?  so there it is, my smile)

This year I've decided that I'm going to keep track of how much things cost to make.  I find it fascinating when other bloggers do it and I've realized that I have no idea what I spend.  So here's the breakdown for this top:

Email ThisBlogThis!Share to TwitterShare to FacebookShare to Pinterest
Labels: sewaholic, sewing for me